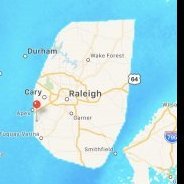 It is definitely a legitimate threat and this isn’t in fantasyland. These are real pieces of energy that should exist in reality.    We all just need to realize we are threading the phasing nee