Just arrived in Snowshoe.  17° with light snow.  Fresh 2-3" since yesterday.  Snowmaking is on its 3rd day and major whales have formed.  Looks like they will be able to open for Thanksgiving. 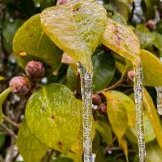 Last night's moonrise over White Rocks and the Patapsco River.