By buckeyefan1,
December 31, 2022 in Southeastern States

Good, then why are you still here trolling everybody else? I don't want to see any posts from you when there is a valid threat. Also, I don't appreciate being called a weenie for remembering that it's 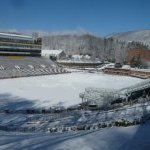