By Damage In Tolland,
March 21 in New England

Getting some help breaking apart a stump out back this morning. 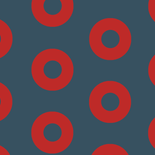 An untreated lawn is a happy ecosystem.   Three different flowers in this one small spot, not including dandelion and white clover.