6 to 8 inches here overnight! I am on the leader board for a few days! 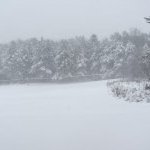 Chased the snow a bit this afternoon into southern Erie County. Nice snowy afternoon down there. Didn’t run into anything too heavy but it was a solid moderate snow. About 3” OTG where I hiked in East