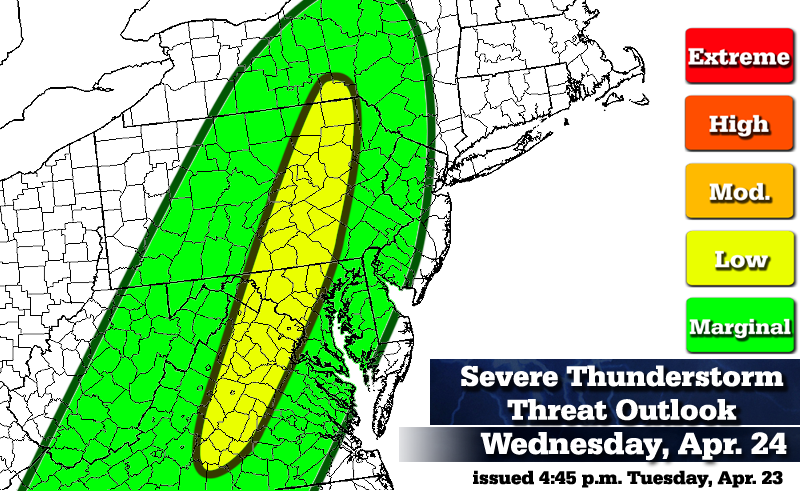 A cold front is forecast to move from west to east across the East Coast on Wednesday. The result could mean scattered thunderstorms along the front, along with a few severe thunderstorms.

A similar setup to this past Friday is expected on Wednesday, with a cold front moving across the area during the afternoon and evening hours. The only difference here is that the cold front is not as strong as that scenario (last Friday) and less convective activity is expected.

Ahead of the cold front, some marginal destabilization is expected as near-surface temperatures rise into the 70's, slightly steepening lapse rates. As a result, Lifted Index values between 0 and -2 are forecast. MUCAPE is meager, with values generally less than 500 J/Kg. Although dew-points are forecast to be in the mid to upper 50's, wind shear and helicity is forecast to be somewhat less than the last event. Bulk shear of 30 to 50kt is forecast across eastern Pennsylvania, coupled with storm relative helicity values of 100-200, so some isolated damaging wind gusts are possible.

In this region, the timing of the cold front corresponds closely with the peak daytime heating. There's also a sliver of 500 to 1000 J/Kg CAPE values expected in south-central Pennsylvania, down into Maryland and Virginia. It's also in this general area that there is a marginal tornado threat, however the tornadic setup on Wednesday is also less impressive than it was last Friday.

Graphics to differentiate between the damaging wind and tornado threats:

The cold front does not make it into this area until midnight or a few hours afterward. At that time, moisture is very limited, wind shear values relax and there should be little to no instability to fuel thunderstorm activity.

Extreme: Conditions are extremely favorable and dangerous thunderstorms are likely.

As the spring season goes forward, I will be making more severe weather outlooks. Any feedback is appreciated and I am still working on the outlook/threat scale. I would like to compare forecasts to verification in the future, so some thought will be needed to address just how best to do so.

*Disclaimer* The intent here is somewhat different than SPC severe weather outlooks. The green, yellow, etc. shadings do not directly correlate between SPC and my own outlooks. I'm still getting a feel for these outlooks, but I imagine that in more impressive severe setups, I will use red and orange colors a bit more generously than SPC might. Also, green colors on my maps indicate a marginal severe weather threat, while on SPC it corresponds to a general thunderstorm (not necessarily severe) threat.