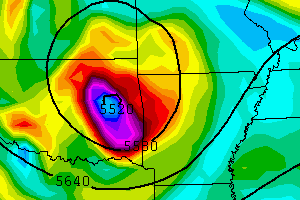 A localized threat of severe thunderstorms, including possible tornadoes, targets Arkansas Sunday afternoon into the evening hours. A compact shortwave trough approaches from Oklahoma during the afternoon, with a modestly warm, moist flow from the south to southeast streaming up the lower Mississippi Valley.

Computer forecast models have been quite consistent with this general threat for quite some time and now that Sunday is approaching, some high resolution, short-term guidance has been reviewed. Clusters of severe thunderstorms are expected to form during Sunday afternoon and track east to northeast across the region. Large hail and a few tornadoes are expected, along with damaging wind gusts and some localized flooding, mainly where any heavy rain falls over already saturated, or even flooded, areas.

With the environment across the Arklatex vicinity being largely undisrupted, a corridor of moderate instability is progged from the Arkansas/Oklahoma border, southeastward across Arkansas and northern Louisiana. The focus for thunderstorm initiation will be immediately head of a weak surface low crossing over from Oklahoma into Arkansas.

The 4km NAM has been consistent for several runs now, showing discrete cells forming on a northwest to southeast axis from approximately Fort Smith to Malvern and southward into southern Arkansas by mid-afternoon. Given the environment, supercells are likely with large hail being the initial threat, given cold air aloft and relatively steep mid-level lapse rates. By late afternoon, the tornado threat will likely increase due to several factors, including locally backed near-surface winds, an increasing low-level jet and terrain influences.

The greatest apparent tornado threat will be from central to east-central Arkansas, given very good model agreement with the most robust cells forming in this location, just ahead of the surface low. There is also a possibility that moisture return may also be slightly underestimated by the models given recent rainfall across the region.

Nonetheless, the setup may also take advantage of channeling of low level flow in the Arkansas Valley, as has been seen many times in the past, meaning that a tornado or two could also be possible between Conway and Fort Smith, on either side of I-40. The confidence in thunderstorm initiation decreases with southward extent, particularly from far southern Arkansas into northern Louisiana. Although some convection may fire here, the most robust storms are likely to remain farther north.

Into the evening, the cells will mature and move northeastward, perhaps reaching the Memphis area before merging/weakening overnight. Both high resolution guidance and the GFS agree in a swath of heavy rain/convection from roughly Little Rock to Memphis. This means that some localized flooding may be possible here. Given the thermodynamic and kinematic environment, a strong tornado cannot be ruled out. Model QPF swaths all support the idea of discrete or semi-discrete convection, particularly from 21-03z from central to eastern Arkansas.

One last note is that although models have been in strong agreement, there may be a very slight slowdown of the system, but this will not have major impacts on the outcome. It does mean that a few strong to perhaps severe thunderstorms may fire in eastern Oklahoma early in the event and that the severe threat will decrease with eastward extent, to the east of the Mississippi River.