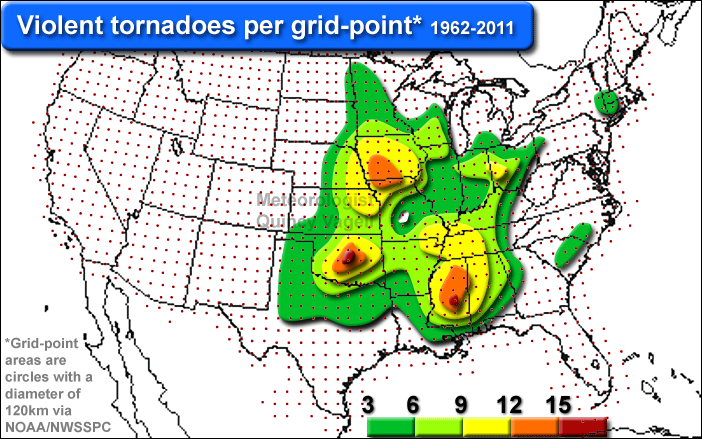 While a broad area from the Plains to the mid-South sees the most tornadoes overall across the United States, there are three sub-areas with the most violent tornadoes. Much of Oklahoma falls into that category, as it is widely considered to be in the heart of tornado alley. Further north into Iowa is another area that has seen the most violent tornadoes during the period. The third area falls across Mississippi, where the tornado season is relatively elongated from the heart of winter into mid-Spring. The tornado season in Oklahoma generally occurs in a narrower window in mid-Spring. The season in Iowa tends to fall from mid to late spring with a secondary peak in the fall. A smaller and less significant maximum for violent tornadoes can also be identified across the upper Ohio Valley. While the tornado season tends to peak there in mid-Spring, a few events have also occurred in the fall.

An interesting tornado minimum occurs in a small portion of central Missouri. Among multiple factors is the unique geographical area Missouri falls into. The classic tornado setup in the Plains is driven largely by lee-side cyclogenesis and the dryline. As storm systems move across the Plains, the bulk of the violent tornadoes tend to occur west and northwest of Missouri. Also, the dryline tends to have trouble advancing enough east to penetrate far into Missouri. Likewise, typical tornado events in the mid-South tend to thrive off of moisture from the Gulf of Mexico, producing tornadoes east of Missouri. With that said, higher instances of violent tornadoes have been noted across northwestern Missouri (tornado alley), far southeastern portions of the state (Dixie alley) and the devestating EF-5 tornado in Joplin, in far southwestern Missouri in 2011.