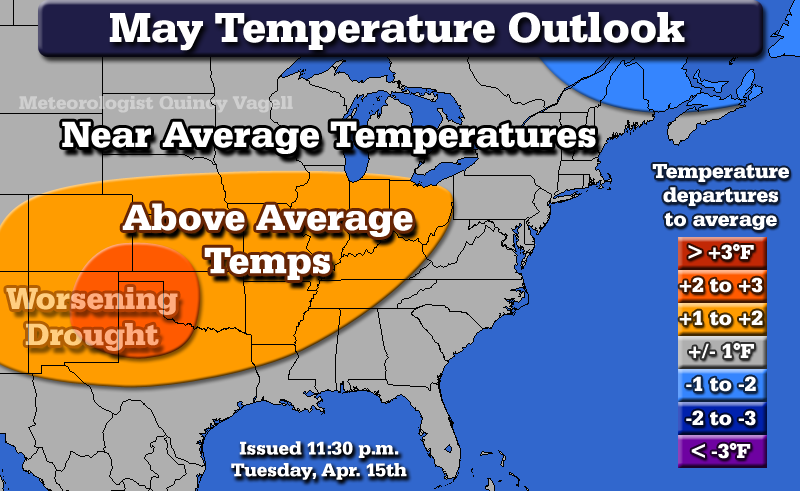 Following up a cold winter across much of the country, April has proven to be a transition month. Although the month started mild for a large portion of the country, much cooler air has moved in for the middle of the month. There are signs, however, that any negative temperature departures after April 20th into the start of May will be relatively insignificant.

Before looking at May, it makes sense to look at the April forecast. For the most part, everything is going to plan from the forecast that was made on March 15th. Although portions of the Northeast have been milder than forecast for the month as a whole, one and perhaps two shots of cool air to finish the second half of April will likely counteract the present offsets. As far as the models go, the Euro MJO prediction of moving into phase 2 and 3 verified very well, although the MJO has since looped back around into phase 5 an 6.

Click here for a follow-up to the April forecast.

Going forward, there continue to be signs of the remnant winter pattern of troughs across the East Coast breaking down. The Euro shows no clear move with the MJO, although it tries to keep it in the vicinity of phases 4-6 to even neutral. Each of those phases would suggest near to slightly above average temperatures for much of the center and eastern portion of the country with slightly below average temperatures across portions of New England. The GFS ensembles move toward phase 8 and 1, suggesting more of a northern Plains warm-up with near to even below average temperatures near the Gulf States.

The thinking is that the persistant drought across the desert Southwest and adjacent lower Plains will continue. This will especially be the case if the CFS is correct with pronounced ridging in the area. The dry soil will tend to favor above average daytime temperatures. So while there may only be substantial confidence in slightly above average temperatures in the range of 1 to 2F across the mid-Mississippi and Ohio Valleys, a +2 to +3F anomaly forecast has been introduced for portions of the western lower Plains. Ridging could extend into the Great Lakes, but still below average water temperatures should mitigate any warming, especially downwind of a prevailing west-southwest flow. There is moderate confidence in some cooler than average temperatures hanging on across northeast New England, so a small area of -1 to -2F anomalies are included for Maine.

A forecast graphic is not being made for this outlook with respect to severe thunderstorms. The year 2014 continues to follow a near-record low number of severe thunderstorm events and tornadoes. A series of severe weather events, which may or may not be significant, are possible between April 23rd and 25th. Beyond that, a fairly zonal flow with some above average heights in the Plains and Midwest does not look overly impressive for severe activity. However, the pattern will favor at least an increase to near average activity through the month of May. In summary, the severe thunderstorm forecast is close to climatology and has little confidence in specifics. Prior years that saw very low activity through mid-April did see an increase in activity by late April. A close analog to 2014 is 2010. That season saw an uptick in severe reports between the end of April and through the month of May.